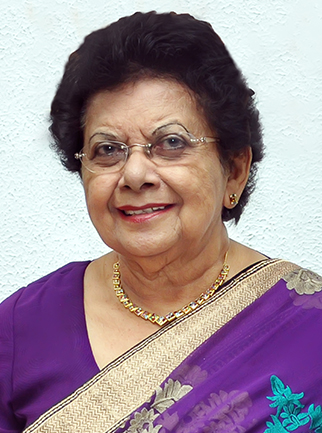 Mrs. Joy Ferdinando is the Creator and Founder of the International Institute of Music, Speech & Drama situated at No. 357 1/1, R. A. De Mel Mawatha, Colombo 03.

She is the Organizing Director of the International Youth Summer Camp which was commenced in 2002 with the International participation of students conducted by British & Irish Directors for Music, Drama & Dance.

She was the first Sri Lanka Representative for the Guildhall School of Music & Drama London from 1994 to 2005 until the amalgamation of Trinity Guildhall in 2005. In 2006 she became the Sri Lanka Representative for the London College of Music Examinations of the University of West London UK in Music, Speech & Drama. In 2009 she received the Honorary Membership of the London College of Music – University of West London UK – The right to use the letters ‘Hon LCM‘.

She also received the Honorary Life Member of the Royal Overseas League in the United Kingdom in July 2014 in recognition of the wonderful support given to the League over the years.
In 2014 she received Honorary Fellow of The Society of Teachers of Speech & Drama ‘Hon. FSTSD‘ – “In recognition of her outstanding work establishing the Sri Lankan Festival & Summer Schools in order to promote the Speaking of English & the Performance of Drama.”

She has also organized an Exchange Programme for 75 students & teachers to Newlands College UK in 2004. In 2006 entertained return visit of 40 UK students & teachers to Sri Lanka.
From 1997 to 2001 students received scholarships for Music to the European Youth Summer Music of the British & International Federation of Festivals UK and teachers of Speech & Drama received scholarships to Mountview Art Centre in the UK.

The Annual Sri Lanka Festival of Music, Dance and Speech affliated to the British & International Federation of festivals for Music, Drama & Speech (BIFF).